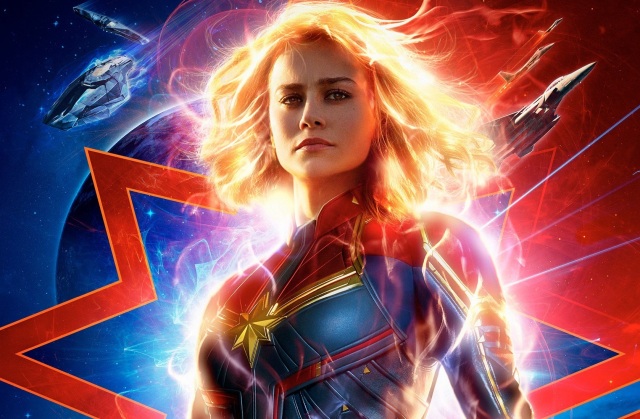 On the surface Captain Marvel might be one of the more straightforward of Marvel Studios’ films, but there’s some intriguing stuff at play underneath.

Carol Danvers has been around in the comic books since 1968, though it wasn’t until 1977 that the character adopted her first superheroic alter-ego, that of Ms. Marvel, taking on the legacy mantle of Captain Marvel (after a previous, separate character sharing that name) in 2012.

So while Danvers and the Captain haven’t been around as long as or share the general public awareness as Wonder Woman, the character has paid her dues.

Mention of Wonder Woman here is interesting, as while DC and Warner Bros made her gender a prominent part of the character’s journey in 2017’s film, here Marvel almost wilfully subvert expectations of such considerations to take a more subtle route in unleashing their first female-fronted franchise.

When alien Kree warrior Vers (Brie Larson) goes on a mission against the shape-shifting Skrull race with her mentor, Yon-Rogg (played by welcome addition to the Marvel Cinematic Universe, Jude Law), which quickly not only goes pear-shaped but also sees Vers begun to unlock a sequence of events which will lead her to unravel a series of recurring nightmare flashbacks.

Ver’s journey leads her to Earth in 1995, and encounters with (amazingly CGI de-aged) younger versions of Nick Fury (Samuel L Jackson) and Agent Coulson (Clark Gregg) and revelations which will change both her life and the future of Marvel history.

That the film presents all this as an unfolding mystery is one of the stronger points of the standard origin story, and as per usual this is entertainment of the highest caliber from Marvel: superb casting (including a star-making turn from Larson, who rises above some deficiencies in the script to make a hugely appealing central character and another fantastic turn from Ben Mendelsohn as Talos, the Skrull, who is obviously having a blast), snappy dialogue and fun action sequences. But it’s somewhat disappointing to report that despite all this, Captain Marvel still feels like one of the studio’s more workmanlike (excuse the gender conflation here) efforts.

While it’s highly admirable (and enjoyable) that it’s never even really made an issue that Vers and Marvel are presented as the equal (and indeed, superior) to any males in her orbit, making the film rather an important step in its own way, it’s a shame that some of this is presented in a less than inspired manner. I found the direction by Anna Boden and Ryan Fleck to be lacking a certain vision, and it’s the first Marvel film where I’ve actually felt the hand of a committee in the course of viewing.

It’s not difficult to imagine that the firing of James Gunn, who had been acting as a kind of creative guru to the studio until a small group of internet nazis dug up some poor taste jokes Gunn had made on Twitter and used those to successfully blackmail Disney into letting him go, had some kind of reverb effect on Marvel (and Captain Marvel). There are choices made in the film which feel distinctly Gunn-ian (is that a thing? It is now), but executed without his very particular flair.

A perfect example of this is the decision to play out a third act fight scene, between Marvel and some of the bad guys, with No Doubt’s Just A Girl playing over the soundtrack. Given the possibility of this particular song to comment on the action, this might seem like a good idea, but on reflection I found myself wondering what the song really had to do with I was seeing onscreen. In hindsight it feels like a choice that Gunn might have considered then rejected as being simply too on the nose.

It might seem unfair to be laying the film with a “what would James Gunn have done?” vibe, but it’s impossible to separate a studio film like this from the events that surrounded its creation.

But don’t let these caveats put you off from seeing Captain Marvel (in 3D if you can, and if you have a cinema that knows how to project the format properly – because the post-converted 3D is really superb), as even Marvel’s most simply efficient is the equal of or better than many other studios’ efforts.

You’ll definitely have a good time (and if you’re a Stan Lee fan, like me, the film may even make you cry in its opening seconds, as I did), and without a doubt it’s a strong introduction to a character who is tipped to become an important lynchpin in Marvel’s future movies (not least of which in next month’s much-anticipated Avengers: Endgame).

And to answer a question I know many of you have (without spoiling anything) Thanos should be very, very worried right now.

Captain Marvel definitely goes further, higher, faster, to use both the character’s and the film’s tag-line, but could have gone even higher, even further and even faster.