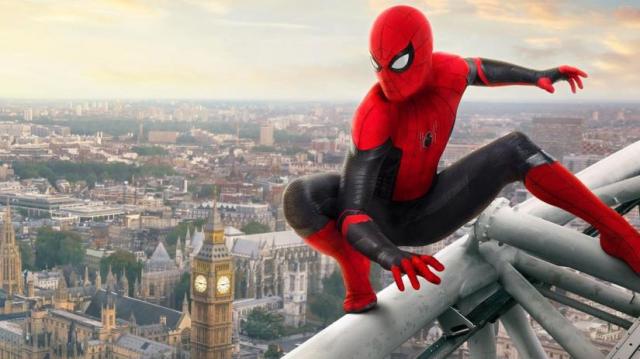 Following up the successful first collaboration between Columbia/Sony and Marvel (Spider-Man: Homecoming), the cosmic hugeness of Avengers: Endgame  and the culmination of Phase Three of the Marvel Cinematic Universe always promised to be a tricky task, but returning director Jon Watts and returning scriptwriters Chris McKenna & Eric Sommers have managed a pretty balanced movie that nicely answers all those demands.

Set eight months after half of humanity was restored to existence in Avengers: Endgame (now referred to as The Blip), the film wastes no time showing us some of the ramifications of this but also throws us headlong into a plot which, by necessity, has to stretch out more broadly than Homecoming’s friendly neighbourhood feel.

Terrifying giant creatures, Elementals, have seemingly crossed over into our world from another reality and, while attempting to enjoy a summer class vacation through Europe and engage with a blossoming relationship with MJ, Peter Parker is pulled into battling these monsters by a heroic newcomer, soon named Mysterio.

With Tony Stark no longer around, Mysterio becomes a mentor figure to Peter, but all is not quite as it first appears and events soon spiral out of our young hero’s control – both in and out of his webby mask.

Jake Gyllenhall’s Quentin Beck (a.k.a. Mysterio) works well against Tom Holland’s Peter Parker, in an arc which nicely defines Peter coming to terms with loss, while underlining his constant struggles with responsibility from a fresh angle. And while the resolution of this arc might be one of the film’s weaker moments, there is still a great deal to savour.

In terms of character development, the high-point of the film is undoubtedly Peter and MJ’s romance. Zendaya’s MJ is a real treat; snarky, goofy and vulnerable, and I could happily watch an entire movie of her and Holland just playing off against each other.

Holland is, it almost goes without saying, a pretty much perfect Peter Parker, beautifully playing the push and pull the character feels between his heroic responsibilities and his teenage life, continuing to make him highly relatable.

The actions sequences are excellent, the climax in the centre of London is one of the best Spider-man set pieces since Spider-Man 2’s train battle ( I saw the film in 3D, which really enhanced this sequence), and the film balances action, drama and (a great deal of) humour deftly, giving it a distinct feel while still integrating it firmly into the MCU.

It’s a superb summer movie, and a lot of fun (often mischievously so), even if a certain amount of Homecoming’s down to earth charm has been sacrificed.

Do make sure you stay through the end credits, as one of the two stings brings not only a wonderful cameo (particularly for long-time Spider-Man movie fans) but a pretty seismic cliffhanger for Spider-Man’s status quo.

The best thing about the film is that it makes you want to spend more time caught up in Spider-Man’s web and in the company of these characters, so bring on Spider-Man: Home From Home, Home Run, Home Sweet Home, or even Don’t Try This At Home…