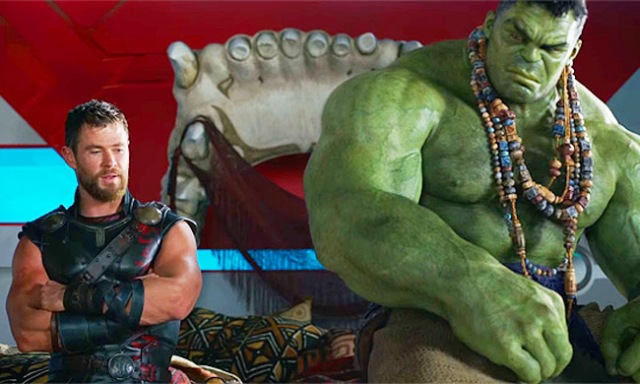 Thor: Ragnarok has laughs. Plenty of them. Perhaps too many. Allow me to explain…

I’ll start by saying there is a huge amount to love about Marvel’s third solo outing for the God of Thunder. First of all it’s the most fully rounded vision of Stan Lee, Larry Lieber and Jack Kirby’s four-colour hero to date, Kirby’s cosmic visuals are like a roadmap for Thor: Ragnarok. It’s also yet another step forward for both the Thor solo franchise and indeed the Marvel Cinematic Universe in embracing its comic book roots.

There’s little desire to coddle non-comic book fans with grounded scenes set on Earth (and the whistle-stop moments we do get on our home planet actually push things into even geekier comic books realms, particularly in one cameo sequence, teased at the end of a previous movie). Within the first twenty minutes or so we’ve been taken to Hell (or the Norse equivalent), Asgard (including another couple of genuinely jaw-dropping cameos), Earth and then into the vast reaches of outer space. It’s all colourful, exciting and breathtaking, and the pace doesn’t really let up, cutting between Thor’s adventures in space and events back on Asgard.

We’re also given the best version of the onscreen Hulk yet, realised by Mark Ruffalo along with state of the art mo-cap, animation and fine attention to detail with character so he now has full Hulk-speak dialogue scenes (and jokes) with other characters. Special mention to Tessa Thompson too, for giving us a delightful, kick ass version of a much-loved Marvel character. I really hope we see more of her in future movies. Idris Alba is given a little more screen time as Heimdall but still feels wasted. Director Waititi features as another comic character, alien stone man Korg, engaging and pretty much played for laughs.

The film also mostly succeeds in breaking the curse of the underwhelming Marvel villains by giving us several of them, all in various hues and shades of villainy. Cate Blanchett is obviously having a bad guy ball as Hela, Queen of the Underworld, Karl Urban crops up to reaffirm his geek cred as Skurge, The Executioner, there’s the ever mercurial Loki brilliantly essayed by Tom Hiddleston, of course, plus we have Jeff Goldblum doing his best Jeff Goldblum thing as The Grandmaster. They’re all layered, interesting and fun.

Ah yes, then we get to the laughs. Ragnarok might best be described as Marvel’s first comedy, so far do Waititi and his team push the humour of the film. I’m all about seeing Marvel broaden their canvas, playing with expectations and giving each film a fresh tone,  an approach that’s paid dividends with the likes of James Gunn and it mostly pays off here as this is most definitely a Taiki Waititi film. It’s an approach which should help the longevity of Marvel movies and keep audiences on their toes (and anyone who thinks of Marvel films as being cookie cutter affairs really needs to open their eyes to the palettes of movies as far apart as Captain America: The Winter Soldier, Ant-Man, Guardians of the Galaxy Vol. 2 and now Thor: Ragnarok).

So far, so Marvel dandy. However, we’re also here for the drama, and occasionally the jokes are laid on so relentlessly in Thor: Ragnarok that they frequently end up severely undercutting the drama.

A major event, foreshadowed all the way through, actually comes to pass near the end of the movie. It should be quite the dramatic moment, as it affects most of the characters and shakes up some of the status quo of the Marvel Cinematic Universe. So, a big deal. There’s a nice, humorous set up to the moment, then straight after it happens any drama arising from the scene is wiped out with a not particularly firing-on-all-cylinders quip. It’s unnecessary, and damaging to our empathy for the characters we’ve been following for six years since Kenneth Branagh’s first Thor movie. That’s quite an investment, and one that takes a hit for the sake of a throwaway gag.

I should reiterate, Waititi and Marvel have produced a top-notch film which will undoubtedly leave you with a smile on your face and the knowledge you’ve spent a good night out at the cinema. But finding that sweet spot between drama and humour takes a careful aim, and this time it feels like Thor’s hammer missed the target by a few inches.