The mountains around Bjørke are extraordinarily beautiful, forming a soaring, jagged cradle around the small village in the rugged western fjords of Norway. But on the summer evening I visit the location, for the filming of a new British horror movie, The Colour of Madness, at the end of a cloudless and unseasonably hot day, that cradle feels somewhat more ominous.

Maybe it’s the décor of the cabin that the crew are holed up inside that helps create the atmosphere, a typical small wooden structure, with verging-on-kitsch late 1950s/early 1960s furniture. Look a little closer, however, and odd details begin to stand out; strange little betentacled knick-knacks, resembling unearthly octopi, and what’s that over the fireplace? Is that a grisly painting of one of H.P. Lovecraft’s Elder Gods? 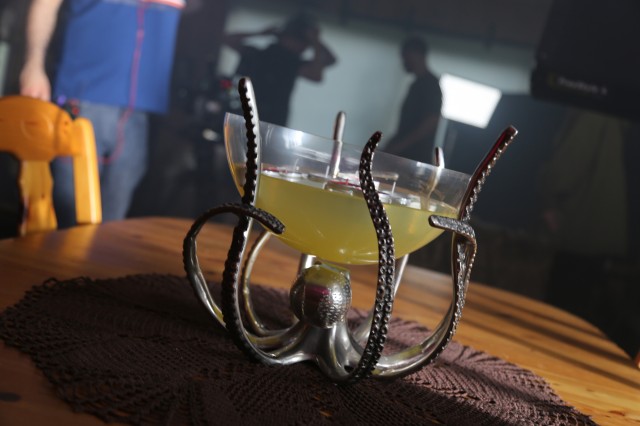 Clearly, dark deeds are afoot on the sweltering, busy set, underlined by the familiar appearance of a petite, graceful figure: Barbara Crampton, the much-loved star of classic genre films such as Re-Animator, From Beyond and We Are Still Here. The actor stands behind the cameras and prepares to shoot a short scene but makes a point of introducing herself to me and Jon, who’s here with me to snap some behind the scenes photos. Then the cameras are rolling, and Crampton is consoling a distraught character played by Sophie Stevens (The Haunted), handing her what looked to me like a suspicious glass of water. I spent some time talking in detail with Crampton about her life and career, so look out for that in an upcoming piece.

With Crampton’s shot in the can, the co-directors, Andy Collier and Toor Mian then busy themselves setting up a tricky POV shot from beneath a glass table, as Stevens’ character succumbs to unconsciousness, spilling the water she’s been drinking across its surface. I got the feeling water wouldn’t be the only liquid spilled during the film’s creepy storyline.

Shooting reached a break and the cast and crew gathered outside in the cooler air, with the mountains looming over us in the gathering darkness.  I ask the directors what brought them to Norway? Had they always planned to film here? “Not at all,” says Mian, munching on some Norwegian-style bacalao, as part of a late crew dinner on the gently rolling hillside. “Originally, we set the story in Scotland, but honestly, so many productions have shot there recently, and we really wanted to avoid any kind of Wicker Man-feel, in terms of the look of the film. Plus, my Mum is Norwegian, so now here we are filming in the most expensive country on Earth!”

“But it really feels right to be shooting here,” Mian says. “Because there’s such a big connection in the story between the sort of Lovecraftian Cthulhu elements and all the water around us! Plus, you know, look at this place!” He finishes on this point, indicating to the breathtaking natural scenery. “We get so much bang for our production bucks!”

Outside the cabin, on location in Bjørke, Norway

And how have they found filming in Bjørke? “Norway’s been great, not at all intrusive and really fluid!” Mian says. “And Bjørke’s been very easy to film in,” Collier adds. “We thought shooting in a tiny place like this might attract lots of local attention, but everyone has been brilliant. We were filming down at the harbour one day and this guy came in on his boat. He started asking a bit about the film, really interested in it all, but when he realised he’d be in shot he just said he’d move his boat somewhere else… and off he went!” 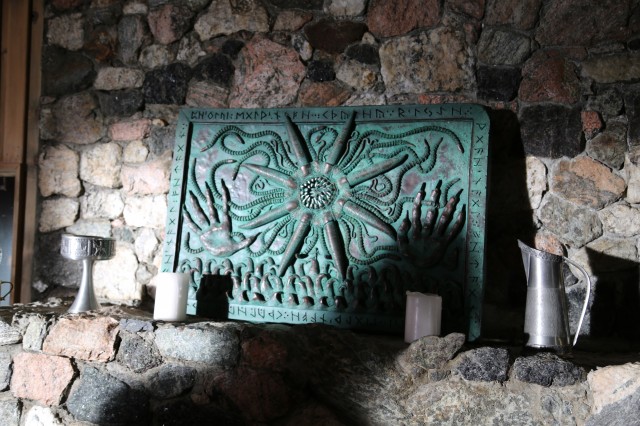 The inhabitants of this cabin clearly shop at Cthulhu-R-Us

Watching them in cramped, hot conditions, I noted the two directors keep a focused but light-hearted set. How do they split duties? “I tend to be more technical,” Collier replies. “Working on DOP stuff and with the camera.” “While I usually work more with the actors,” Mian finishes. Does this lead to any kind of tension between the two of them, I wonder? They both laugh and simultaneously reply “Only sexual tension!” I get the feeling they’ve been asked this before.

I’d recently watched the pair’s previous film, Charismata, and noted the callbacks to Alan Parker’s 1987 psychological horror, Angel Heart, as well as the visual cues taken from David Fincher’s Seven. What could they tell me about any such inspirations for their latest work?

“Nicolas Winding Refn!” says Collier, without missing a beat, before Mian adds “I think Drive is a big influence on this film, in terms of the way we’re approaching the narrative.” “And definitely The Neon Demon for the visuals.” Collier finishes. The pair obviously enjoy working together, as they weave in and out of each other’s sentences.

“But another big inspiration is John Carpenter’s The Thing,” says Mian. “We’re going full-on with practical effects, loads of Cthulhu monster tentacles and all kinds of horrible stuff!” “Films like The Howling, those great 80s horror movies with all the practical effects, all very tangible, that’s really the essence of what we’re going for!” Collier adds enthusiastically.

And what can you tell us about the plot of The Colour of Madness? “Not much!” says Collier. “Or we’d have to kill you!” Mian jokes, or at least I hope he was joking. 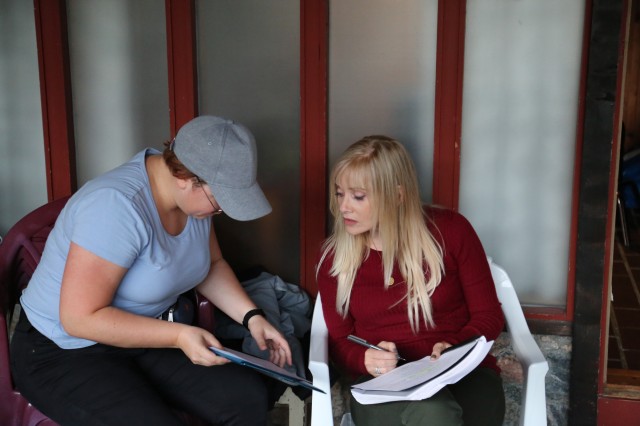 Barbara Crampton (right) practices some lines of dialogue in Norwegian

“One of our characters, Issac, played by Ludovic Hughes, returns to the remote Norwegian island where he grew up, after his mother dies,” continues Mian. “But on coming back with his pregnant wife they find things aren’t very welcoming and they quickly find themselves involved in a nightmare situation involving a Pagan cult, and, well… other things… ha ha.”

I wanted to move forward, to talk about what these two likeable creators have lined up for the future. “Well, there’s a film called Perpetual,” Mian offers. “That’s probably our next film.” I tell them I had read up about it and am intrigued by the potentially controversial plot, involving a small-town cop hunting a serial killer who leaves behind what seem to be Islamic terror calling cards in what’s left of his victims.

“Yeah, it’s a bit in limbo at the moment,” explains Collier, somewhat wearily. “We had some strong studio interest, but then they got cold feet over the subject matter. We’re quite prepped on it though, so as soon as the financing comes together, we’re good to go.”

“Plus we have a sort of medieval western we’re working on,” Mian adds. “The locations here would be perfect for that, so maybe we could even shoot that in Norway too.”

Maybe someone should advise Sophie Stevens not to drink that water

“We learn from each of our films,” Collier concludes, as the actors are dismissed for the day and wander off in the now-inky black Norwegian darkness while the crew wraps and prepares for a long night shoot the following evening. “And we’re getting more confident. The Colour of Madness is a big leap from Charismata, and I think horror fans will find a lot in it to get excited about!”

As Jon and I finished our visit and drove away into the night, we left feeling excited at what horrors these directors and their hard-working crew would unleash on the screen, and kept an extra-sharp eye out for tentacles as we drove past the nearby lake…

The Colour of Madness is now in post-production and will be released in 2020.