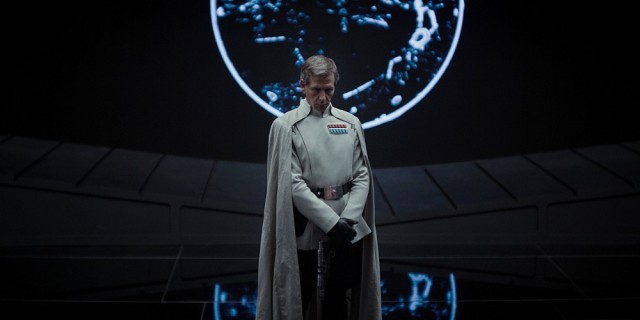 There’s plenty to get excited about at the thought of Rogue One: A Star Wars Story landing in December.

There’s the Dirty Dozen in Space concept everything we know about the film seems to be pointing towards, a desperate group of Rebels heading off to steal the plans for the original Death Star. You might be vibed by the incredible, diverse ensemble cast, headed up by Felicity Jones, Diego Luna, Riz Ahmed, Ben Mendelsohn, Jiang Wen, Donnie Yen, Forest Whitaker, Mads Mikkelsen, and Alan Tudyk. Or perhaps you’re a fan of Gareth Edwards, the director who gave us both the excellent, low budget Monsters and the fair stab at Japan’s greatest export that was 2014’s Godzilla?

And if none of that grabs you, surely the final shot of this most recent trailer will raise your pulse rate, as we are given our first glimpse of the Dark Lord of the Sith himself, Darth Vader.

The first ‘sideways look’ into the Star Wars universe, a direct prequel leading into the opening moments of the original film (or Episode IV, if you must), arrives December 16, 2016 and I’m already camped outside my local cinema in readiness for it. Actually I’m not, but if anything was going to make me do that it would be this latest trailer!