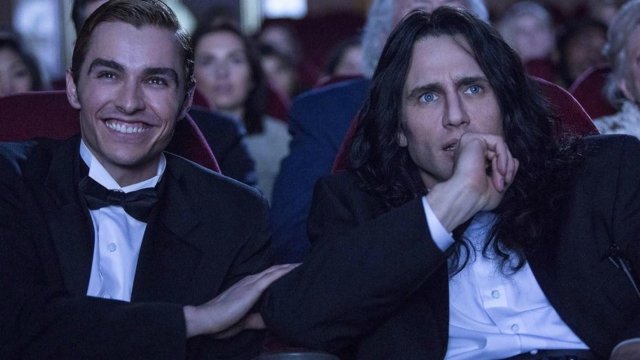 When talking about James Franco’s The Disaster Artist it’s probably best to get the elephant in the room (no pun intended) out of the way first.

Franco has had a number of troubling accusations leveled against him, and while trial by social media is a dangerous arena you’re going to have to put them aside if you want to enjoy this film as it’s the Franco show all the way.

Still with me? Okay, well this recent news is made all the more sad and frustrating because Franco has made one hell of a film. Telling the story of the unlikely friendship of Tommy Wiseau and Greg Sestero, and their even unlikelier journey to making one of the truly great cult movies of all time, The Room.

If you’ve ever seen that remarkable creation, or have knowledge of the bizarre circumstances of the film’s production, you’ll understand that it would have been all too easy to make The Disaster Artist from a position of sneering at its subject. Instead, Franco and co have crafted something which not only gets as close to finding the man beneath the enigma that is Wiseau (who lies about both his age and background) as we’re ever likely to get, but does so with a surprising amount of heart and frailty. More importantly we’re allowed to see the sheer force of will it took Wiseau to self-finance and write, produce, direct and star in his own movie. Fans of The Room will not be disappointed at the lovingly recreated sections of that most bizarre of movies (and stick around until the end of the credits for a typically gonzo appearance from Wiseau himself).

Anybody who has ever attempted an act of creativity will empathise with Wiseau and marvel at the true story of something that became derided but loved by millions of moviegoers. Much like Tim Burton’s Ed Wood, this is a film about the outsider and one which celebrates and exalts that position.

It’s possible Franco is about to get firsthand experience of being a Hollywood outsider, and if the allegations against him are proved true then that will be deservedly so, but until we know more I’m going to judge the film on its own merits, and this is a warts-and-all look at a true individual and is one of the most enjoyable movies I’ve seen in a long time. Highly recommended.