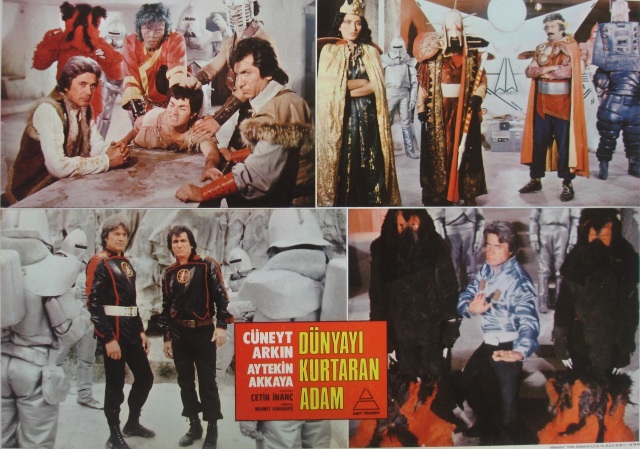 For lovers of cinema, and in particular genre cinema, the realm of Turkish exploitation films, sometimes referred to as Turksploitation, is one of the most vibrant (and frequently hilarious) corners to poke around in.

Unencumbered by trivialities like copyright law or lack of budget, these anarchic, freewheeling films, mainly produced in the 1970s and 1980s, often feature 100% unofficial characters such as Spider-Man or Captain America, and almost always star manly men and voluptuous women, accompanied by “borrowed” snippets of music scores from the likes of John Barry, with little regard for staging, editing or indeed, a story.

What the films lack in narrative cohesiveness however,  they more than make up for in sheer exuberance and unfettered energy. A night spent with 3 Dev Adam (Three Mighty Men), Supermen Dönüyor (Turkish Superman) or Seytan (Satan) – a virtually shot for shot ‘remake’ of The Exorcist – will likely leave your jaw on the floor at both their sheer audacity and their flair and verve! You could never accuse these productions of being dull or uninteresting!

So it’s exciting news that one of the most infamous of these movies, Dünyayı Kurtaran Adam (The Man Who Saved The World), more familiarly known as “Turkish Star Wars”, has itself been saved!

Available for many years only in a quite dupey-looking version sourced from VHS, the last remaining 35 mm print has just been rescued by Ed Glaser of the Neon Harbor production company, with a great deal of help from noted Turkish film journalist and film enthusiast Ali Murat Güven.

In the autumn of 2015, Güven, owner of the Turksploitation label, Aztek Film Production & Distribution Ltd (their first DVD release of Operation Codename: Long Live the Fatherland is imminent), bought the print from a retired cinema projectionist in Anatolia, Turkey, who had lied to the distributor in order to keep it. Now Güven has sold on the print to fellow enthusiast, Glaser, which is good news for the rest of us as he hopes to scan the film for future digital posterity.

Featuring Turksploitation superstar Cüneyt Arkın, Dünyayı Kurtaran Adam uses wholesale blocks of special effects footage from Star Wars and borrows chunks of the music scores from Star Wars, Planet of the Apes, Moonraker, Flash Gordon, Raiders of the Lost Ark and the original Battlestar Galactica TV series, and then spins off into its own uniquely demented storyline involving swordfights with a gargantuan sword, a man who trains with huge boulders tied to his legs, another man with two brains (most definitely not Steve Martin) and a whistle that attracts skeletons.

“A 35mm print of ‘Turkish Star Wars’ is the holy grail,” says Glaser, “not just of rip-off films, but all cult film. There are no negatives, and the few other prints of the film ever struck have been destroyed. My goal is to get this one scanned to preserve it for posterity — and hopefully screened in a theater for other fans like me.”

While this isn’t quite up there with finding a copy of the pre-studio mutilation of Orson Welles’ The Magnificent Ambersons, Güven and Glaser’s efforts represent an equally welcome contribution to film history. And you definitely won’t find a man with two brains in Welles’ film!

Keep watching the (Turkish) skies for more news on this as it develops!