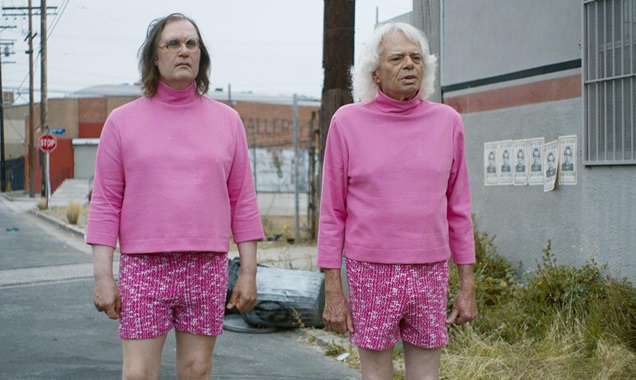 Big Ronnie is a grinning grotesquerie who wanders around in a series of bizarre outfits, frequently with his nasty-looking penis dangling halfway to his knees. When he isn’t dragging his poor emotionally stunted, needy son, Big Brayden, around to present a tourist trap disco tour of derelict locations, Ronnie covers himself in layers of thick grease and violently murders anyone who crosses him. Or even poor, hapless souls who don’t cross him. Ronnie is not exactly picky when it comes to strangulation.

Underneath the unwashed y-fronts, (literally) in your face fart gags and dangling penises there beats a curiously affecting, albeit diseased, heart. The murder plot eventually gives way to the story of a father and son finding each other after years of emotional abuse, before tailing off into a deep end of… well, actually, I’m not sure exactly what happens at the end. There might be a point to it all, but I’m not sure it actually matters if there isn’t. At the very least you’re sure to come away from a viewing wanting to sing and dance to the line “Hootie Tootie, Disco Cutie!” As cinematic gifts go, that’s pretty decent.

There’s nothing remotely real-world about Jim Hoskings’ film, and yet it’s not difficult to imagine these characters existing on the fringe of society, too out there even to be featured on reality TV shows and living on the same block as Pink Flamingos’ Egg Man and Connie & Raymond Marbles, or even Blue Velvet’s Frank Booth in a lighter mood.

Imagine a film that has some of the oddball feel of a Napoleon Dynamite sequel as made by John Waters, featuring a synth-driven electro pop score, with lashings of sex, gore and greasy murders, and you’ll get a good feel for what you’re letting yourself in for. There are moments of such out and out goofiness (Ronnie’s spotlit, street disco solo – all wild hair, gangly legs and dangly cock – being a prime example) that you can’t help but warm to the strangeness being thrust in your face.

The Greasy Strangler is, as they say, not a film for everyone. But it is one of the more bizarre and frequently laugh out loud funny films I’ve seen in a long time. It also has the best and most disgusting prosthetic movie wang since Mark Wahlberg’s Boogie Nights dazzler. So you know you’re getting bang for your buck.