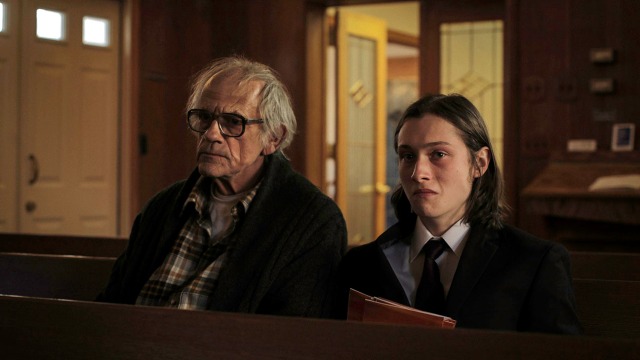 One of the great pleasures of watching so many movies, as I do, is the joy of discovering a film about which you have little or no previous knowledge, which connects with you on different levels and immediately creates a bond which you know will likely be enriched by multiple viewings through the years.

Such is the case with low budget indie chiller, I Am Not A Serial Killer. Based on a 2009 novel by Dan Wells, this adaptation stars Max Records (the child star of Where The Wild Things Are), Laura Fraser (from Breaking Bad) and Christopher Lloyd, and is directed by Billy O’Brien – whose work I’m completely unfamiliar with, but will be paying close attention to from here on.

The plot follows teenager and diagnosed sociopath, John Wayne Cleaver (and what a fabulous name that is for a movie with this title), who must hunt down a grisly serial killer in his hometown.

As well as his diagnosis, Cleaver has to contend with being the son of the local mortuary practitioner in this small community, a fact which makes his life more difficult given the usual high school social conventions. How the young man deals with these conventions is just one of the wonderful detours the film takes while gradually building on the nightmare of the central story.

O’Brien’s Irish produced film (despite being filmed in Minnesota) moves at a deliberate pace and worms its way into your affections primarily down to the central performances by Records and Lloyd.

Records’ character in other, less certain hands could be impossible to like or empathise with, but writing, direction and performance blend to give a layered, textured lead role. Likewise, Lloyd is just a delight to watch, giving us a perfectly measured character who will lead you on quite an emotional journey. It’s a million miles (or more) from his signature role as Doc Brown, in the Back to the Future films.

If some of my descriptions seem a little obtuse, it’s because I have no intention of spoiling the wonderfully warped trip this film takes you on, it’s lo-fi naturalistic style doing its best not to prepare you for the moments (and there are quite a few) when the rug is pulled from under you.

This wry, darkly humourous blend of several different genres, including black comedy, teen coming of age drama, dark crime movie and, well, something else, is ghoulish and nightmarish, but also thoughtful and insightful, full of offbeat observations and several “did that just happen?” moments.

O’Brien’s slyly titled film is, as I’ve mentioned previously, one I’m already looking forward to revisiting, which is a rare enough quality these days . Next time I might skip eating beforehand, though…