“This is not going to go… the way you think!”

Luke Skywalker’s ominous words, highlighted in the trailer for Star Wars: The Last Jedi, could easily stand as the film’s throughline.

The overwhelming message of Star Wars: The Last Jedi is that families are complicated and move in unexpected directions. It also has a lot to say about being screwed up by our fathers.

Overwhelming also accurately describes what I felt about the film at the end of its two and a half hour journey. It’s somewhat overlong but it features some astonishing action sequences, is one of the visually richest Star Wars films and contains what might be my single favourite moment from the entire franchise.

In many ways, The Last Jedi mirrors both the darkness and structure of the Original Trilogy’s middle film, The Empire Strikes Back, but writer and director Rian Johnson is smart enough to take off into some truly wild new directions during the final third.

Picking up right where The Force Awakens left us, this new installment hits the ground running and the pace barely lets up. The expanding group of characters, old and new are pretty successfully juggled so that everyone is given satisfying arcs, this particularly benefits Oscar Issac’s Poe Dameron, and Carrie Fisher and Mark Hamill as Leia and Luke. Daisy Ridley continues to command the screen, especially in her dealings with Adam Driver, their interactions are electric.

John Boyega gets to play off new-to-the-franchise Kelly Marie Tran – both of who are great value but unfortunately shuffled into the film’s weakest thread – a trip to a casino world that’s given a decent barbed comment on the social structure of the Star Wars galaxy but feels rather unnecessary, structurally, and also, dare I say it, feels rather like an outtake from the dreaded Prequels. Indeed, this thread also manages to waste the always welcome presence of Benecio Del Toro.

While Johnson’s generosity to give everyone breathing room is commendable it does also see The Last Jedi surrender some of Empire’s structural elegance in favour of a more scattershot approach that leaves the film feeling a little overstuffed.

Still, this is a film with more on its mind than just rehashing the franchise for a new generation or showing off special effects. The relationship dynamics established are nicely developed, and not all in ways you might be expecting, Johnson keeps things surprising, and manages that to the very last frames. The Last Jedi is drenched in darkness but garnished with light and hope.

The consequences of familial actions, in particular those of fathers, is a deep running vein through the film, but it also suggests that family finds its own shape and can be forged in new ways.

Alongside all the drama Johnson gives us breathless action and some of the most gorgeous filmmaking and visuals of the series, using the colour red to particularly strong effect. An opening space battle and a dizzying lightsabre battle are among the highlights.

There are lots of callbacks (visually and thematically) to both Empire and Return of the Jedi, and a beautiful closing moment for one character which returns us right to the heart of Star Wars (Episode IV). To say any more would involve spoilers, but suffice to say there are some big emotional pay-offs.

As I mentioned before, The Last Jedi also features a sequence, possibly my favourite of the franchise, so balls-out audacious that it more than makes up for any deficiencies the film might have. You’ll know it when it arrives, a moment so glorious and exciting it will leave you very happy that Johnson is forging the future of Star Wars with his upcoming new trilogy.

I’m not certain The Last Jedi is quite the masterpiece many have been proclaiming, it’s too inelegant for that, but it’s eager to please and will leave you exhausted as you emerge from the cinema. It’s a shot of pure Star Wars adrenaline.

Like family, The Last Jedi is messy and doesn’t go the way you think. Ultimately though, you can’t help but love it.

Disney’s huge D23 convention has just fired one of its big guns, as they revealed a new behind-the-scenes video for writer/director Rian Johnson‘s Star Wars: The Last Jedi.

There’s a lot of interesting material here, including the first footage of new characters played by by Laura Dern and Benicio Del Toro, as well as a glimpse of Carrie Fisher in her final role as Princess Leia.

This episode of the long-running franchise will obviously be an emotional journey. Star Wars: The Last Jedi is released on December 15, 2017. 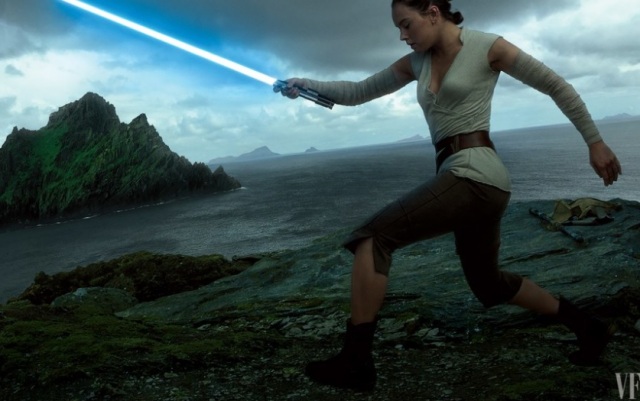 It’s always an exciting time in the run up to a new episode in the Star Wars saga and that excitement was dialled up today with the reveal of a fantastic and exclusive gallery of photos by Annie Leibovitz for Vanity Fair.

As well as action shots of familiar characters, staged portraits and behind the scenes glimpses, the photos reveal characters new to the saga, including those played by Laura Dern and Benicio Del Toro, who portray Vice Admiral Amilyn Holdo and “the shifty ‘DJ'” respectively.

Head over here to Vanity Fair to see the full stunning gallery, and get ready for December 13th when Star Wars: The Last Jedi explodes into cinemas worldwide.