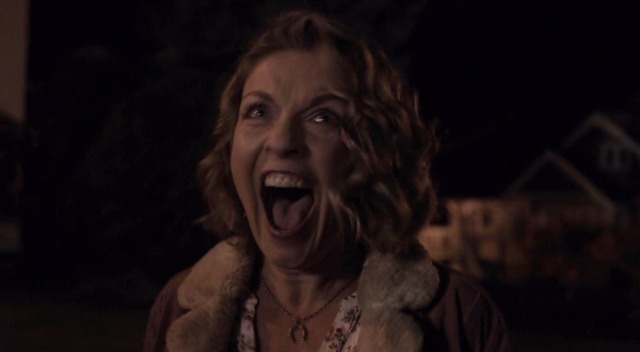 But anyone expecting a cosy, happy denouement wrapped up in a neat bow for the residents of Washington State’s most bizarre town (and beyond, with these eighteen episodes) has either never paid attention to the auteur’s work or is going to have to try to take comfort from events in previous installments because Lynch was determined to go out with a take-no-prisoners bang of the bleakest kind.

Episode 17 gave us a more conventional climax (or as conventional as anything can be with Lynch), seeing many of the characters driving the narrative coming together (in the Sheriff’s office of Twin Peaks, naturally) and the evil spirit of Bob finally (perhaps, we’ll come back to that) laid to rest. But Cooper says “Now there are some things that will change…” and seemingly the first thing to do so (after a conversation with David Bowie, now played by a steaming teapot, of course) is that Cooper attempts to go back in time and save Laura Palmer before her terrible final night. But is he successful? The infinity loop image made in the steam produced by David Bowie’s teapot (and isn’t that a hell of a sentence to type) suggests otherwise.

Lynch still has another fifty minutes to go and he doesn’t waste a second of them as he makes even more sweeping changes, launching Cooper and Diane into an alternate time/world where they have adopted different personas (Richard and Linda) and where Laura Palmer – in the persona of Carrie –  is now living in Odessa, Texas, and still apparently in a world of trouble, with a dead body in her apartment. So perhaps Cooper’s plan to save Laura did work…

Cooper persuades Carrie to travel with him to Twin Peaks, and much of the episode is taken up by their largely silent journey, and its here that Lynch begins to ratchet up the tension. Along the way, Lynch drops in hints and portents that things are not as they should be (the white horse which appeared in Sarah Palmer’s visions, character names which harken back to clues spread out over the past twenty five years).

Arriving at the old Palmer house, both Cooper and Laura slowly come to the realisation that evil is eternal in a deliciously directed and acted scene, leaving us with an ending both shocking and horrifying, and one for which we may never receive answers. Will the evil which has haunted Twin Peaks play out again and again? Will the fight for Laura’s soul ever end? Does this speak to wider questions of evil’s ever-present existence in the world (theirs or ours)? Will Cooper and Laura ever free themselves from wherever they are now, or have those characters ceased to exist? Would this set off a whole new set of mysteries were the show ever to return (though I guess that last question answers itself, but still…)?

“The past dictates the future,” Cooper intones, during the penultimate episode, further suggesting an endless cycle of events, in which our characters appear to be trapped.

Lynch has given us the show he wanted to make back in 1990, except now he deals with a network (Showtime, and plaudits to them) which understands that in order for this to happen the artist must be allowed to unfurl the story at his own pace, in his own way: each week has given viewers a unique and thoroughly new experience, from romance to comedy to outright existentialism and finally, returning to horror, where it all began.

Art exists to challenge and provoke, to make us view the world from other perspectives, and Lynch and his team have done this for eighteen hours. The return to Twin Peaks has been more than any of us could have oped for,  in this viewer’s eyes it is a triumph which will enthrall, amuse, terrify, frustrate, mystify and even make you cry. It is one of the most astonishing pieces of TV ever.

And we shouldn’t expect answers from Lynch anytime soon. However, in the 2004 book Nightmares in Red, White and Blue: The Evolution of the American Horror Film, by Joseph Maddrey, Lynch says:

“Being in darkness and confusion is interesting to me. But behind it you can rise out of that and see things the way the really are. That there is some sort of truth to the whole thing, if you could just get to that point where you could see it, and live it, and feel it … I think it is a long, long, way off. In the meantime there’s suffering and darkness and confusion and absurdities, and it’s people kind of going in circles. It’s fantastic. It’s like a strange carnival: it’s a lot of fun, but it’s a lot of pain.”

That would seem to be a statement which not only fits with his entire body of work, but also feels quite specific to this last season of Twin Peaks.

Cooper/Richard’s chilling final line and Laura/Carrie’s final, blood-curdling scream will resonate with you for days after, as in its final seconds Twin Peaks returns to the horror which has run through its icy veins from the show’s first moments of discovering a teenage body wrapped in plastic on a lonely beach.

“She’s dead… wrapped in plastic,” said Pete Martell on discovering Laura’s body back in 1990, and perhaps she always will be.

5 thoughts on “What Year Is This? – The Triumph of Twin Peaks”